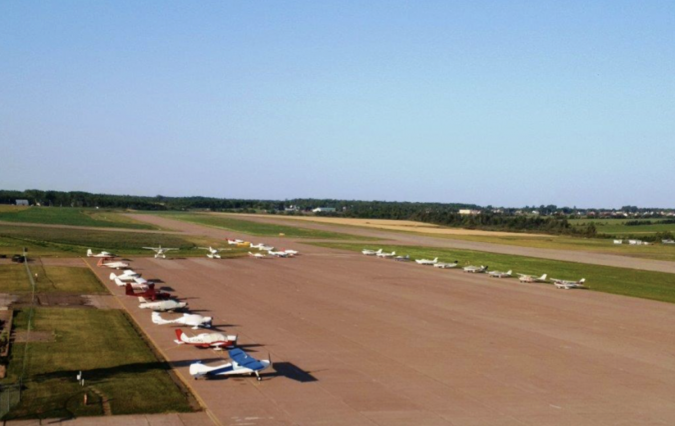 Over 30 aircraft belonging to members of various southern Ontario chapters of COPA touched down at Summerside Airport in Prince Edward Island on August 27 & 28.

The Summerside fly-in gathering was co-organized by pilot Lee Arsenault and his wife Marilyn Staig of Pickering, Ontario. Lee is originally from Egmont Bay, P.E.I.

Lee and Marilyn planned the event after attempts to get a group of pilots to the Island last year resulted in low attendance due to poor weather. They said the response to this year’s call out to fellow pilots to come to P.E.I. was overwhelming.

The group of Ontario pilots and passengers enjoyed a week-long tour of the Island, taking in the local sights and experiences both as a group and individually. Planned activities included golf, an Acadian kitchen party, and a flight to Cable Head Air Park in St. Peters Bay, P.E.I. for a picnic lunch. The group stayed walking distance from the airport at Slemon Park Hotel & Conference Centre.

The 32 planes shared the ramp with a Royal Canadian Air Force military aircraft that was training at the Summerside Airport during the same time frame. A couple of the fly-in participants volunteered their planes and flying expertise to help conduct a search and rescue exercise with the military’s CC-130 Hercules aircraft.

A great time was had by all. For pilot Flavelle Barrett of Lindsay, Ontario, the journey was well worth it. “This was the most amazing trip. This was on my bucket list at the very top,” said Barrett. “This has been the dream of a lifetime.”