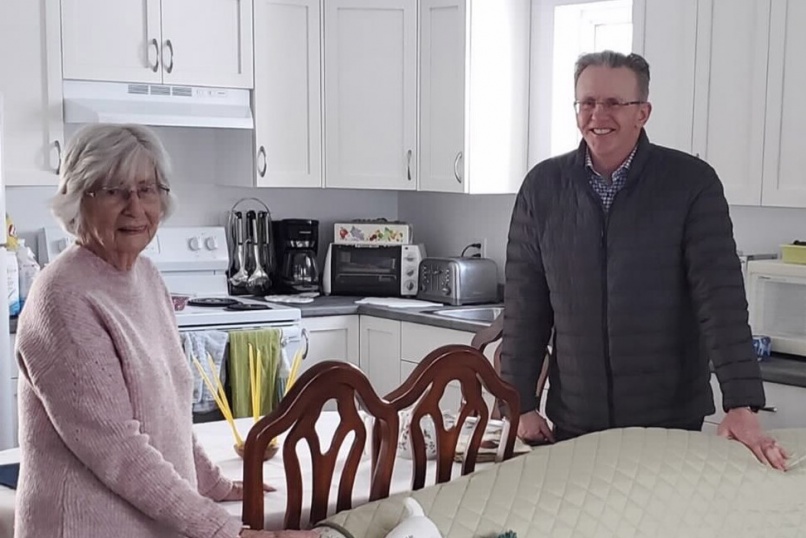 Slemon Park is currently completing six of their 16 planned new build homes. These will be the first new homes built in the community since the 1950s.

The first newly constructed home is being rented by Jean Balsom.

Jean, originally from Freeland, PE, decided to make the move to Slemon Park to downsize her home and associated responsibilities. “Owning a large home is a lot of work and maintaining it gets harder as I age,” said Jean. “The Living-Made-Easy model at Slemon Park gives me peace of mind. Plus, I don’t have to compromise on the yard and privacy that I’m used to having,” she added.

The first of Slemon Park’s original homes were officially opened in 1949 in support of the property’s former use as a Canadian Air Force base. Built during the baby boom era, these homes were not designed with the needs of an aging population in mind.

Prince Edward Island’s age demographic has shifted, and Slemon Park has adapted to meet this evolving market demand by converting some homes into age-friendly homes. Slemon Park has completed 27 such age-friendly renovations over the last four years. The new homes are being built to accommodate these age-friendly features as well.

The new homes are also 21 per cent more energy efficient than a typical new home built to the national building code, earning them the ENERGY STAR certification developed by Natural Resources Canada.

For Jean, these age-friendly and energy-efficient features come as a bonus. “I know that I’ll be very comfortable living here for a long time, no matter what happens as I get older. I definitely feel good about saving some energy for the planet too,” she said.

Jean received her keys on December 17th, almost 60 years to the day since she previously moved to Slemon Park with her late husband, Jim Balsom. Jim spent his entire married life serving in the military and was stationed at Royal Canadian Air Force (RCAF) Station Summerside. The Balsoms lived just one street over from Jean’s current home for three years before being transferred to Winnipeg. Jean and Jim raised three sons, Barry (Arlington, PE), Ian (Ottawa), and Kendall (Vancouver Island).