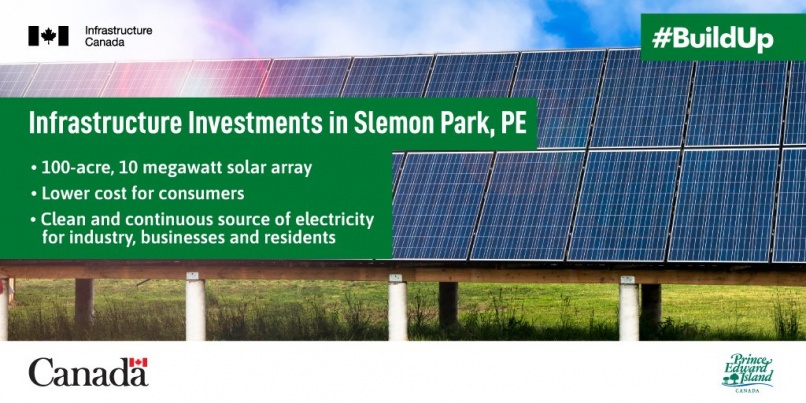 Slemon Park, Prince Edward Island, August 13, 2020—The health and well-being of Canadians are the top priorities of the governments of Canada and Prince Edward Island. But the COVID-19 pandemic has affected more than Canadians’ personal health. It is having a profound effect on the economy.

That is why governments have been taking decisive action together to support families, businesses and communities, and continue to look ahead to see what more can be done.

“The people of Prince Edward Island are blazing a trail to energy self-sufficiency, and the Slemon Park Microgrid Project is another big step in building strong, sustainable communities. This partnership will provide a clean, continuous source of electricity for residents, businesses and industry in Slemon Park. Canada’s Infrastructure plan invests in thousands of projects, creates jobs across the country and builds stronger communities.”

The Honourable Catherine McKenna, Minister of Infrastructure and Communities

“MP Bobby Morrissey has been a powerful advocate for clean energy in PEI. This smart grid project in Slemon Park will reduce electricity costs for families on the island.”

“The Slemon Park microgrid project addresses three vital areas of the Provincial Energy Strategy – efficiency, conservation, and renewables. This project will reduce GHG emissions and our reliance on imported power. This is a positive step in moving Prince Edward Island towards energy independence.”

Chantalle Aubertin
Press Secretary
Office of the Minister of Infrastructure and Communities
613-941-0660
chantalle.aubertin@canada.ca